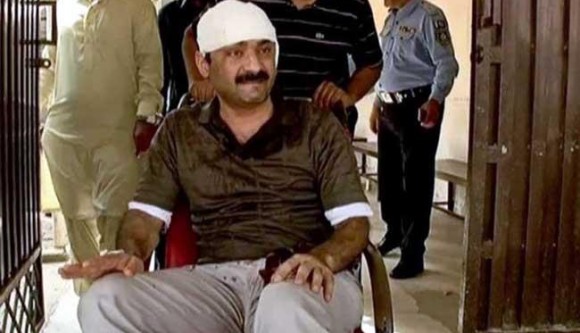 These lines have been ringing in my head since the day, my very dear colleague, Ahmed Noorani was attacked. I struggled to write but found myself blank. There were many thoughts in mind but putting them into writing turned out to be the biggest challenge.

The reason was obvious. I couldn’t write what I wanted to write and I didn’t want to write what I could write. I am not going to guess that who attacked him because I don’t have the evidence. The attack has been carried out by unknown assailants is what is known to us.

We live in a country where the victim journalists are not only supposed to struggle for survival, they are also required to collect evidence about the identity of the attackers. If the history is any guide, the government will not solve this mystery either.

Regardless the attackers, this incident has left us wondering what is safe to speak. The space for free speech is shrinking by the day. Only the smartest among journalists know who to shout at and earn in return not only public appreciation but a good amount of money through high rating as well. Some have learnt this trick through personal experience; others took lesson from others’ ordeals.

Ahmed Noorani that I know is a different type. He is straight forward to the core. He is what he doesn’t seem to be from a distance. Those in close contact with him will testify he is among the finest human beings, a caring colleague and a dutiful family person. He made a name for himself in short span. He has done stories that a reporter would dream of; myself included.

That he thinks differently is what made his life difficult. Rarely, I have seen rapid transformation of thoughts in a person as has been noted in his case. He doesn’t like grey areas. He wants to see the world in black and white and this is the point where trouble starts for him.

I don’t agree with him at many points. That said, it doesn’t make either my opinion absolutely right or his views purely wrong. Many other colleagues don’t agree with him either. That none of us are in 100 percent agreement with each other, will be a rather more accurate statement. In cases, we have difference of opinion with our top management as well.

None of the staffers has ever been fired or threatened to be fired on the account of having different opinion. It is rather considered the beauty of Jang Group and goes in its benefit as well. A diverse array of opinion and information is published and broadcast through this media group bringing it as much diverse readers and viewers in return.

Having an opinion means having enemies as well. People love and hate each other on the basis of opinion. I have first-hand experience of being revered and reviled by the same people in different times. We all keep our thoughts very dear. That those having views entirely different from us also keep them as much dear is what we don’t understand.

We often tend to stick to our views considering them as ultimate truth. The reality is somewhere in-between. More we know, further we realize that no story is as simple as we like to believe. It is though unpopular to reconsider the views and sticking to them is rather taken as a sign of confidence, it is sheer intellectual dishonesty to preach something we internally know it is wrong.

Ahmad Noorani is among those journalists who are open to revisit their views provided you are able to convince them. Changing somebody’s thoughts can’t be done through hitting at his head. Doing so indicates his only crime is that he thinks. That such cowardly acts can’t submit him silence should be a bad news for the attackers.

Thoughts outlive individuals. Important is to address the questions being raised, not to kill them through repressive means. Deng Ziaoping, the architect of modern China, had urged his countrymen to leave aside their ideological biases and seek truth from facts. Pakistan can also move forward by following this philosophy. If personal experience is taken a guide, torture can’t change somebody’s belief. It only strengthens them.