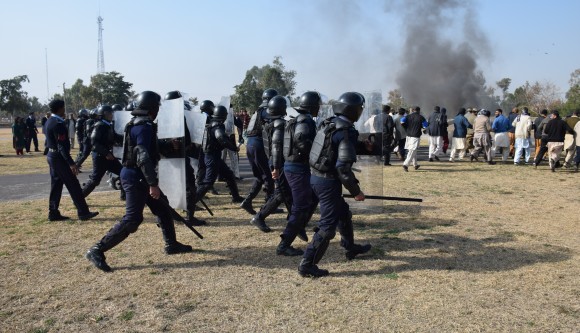 Islamabad, January 14, 2015; Since Pakistan has become the most dangerous country for journalists, the whole world is focusing it in regards of safety. There are more resources but the stakeholders are on backseat. Press clubs and unions should assess their responsibilities and present their demands to the concerned international organizations. These comments were passed by Mr Owais Aslam Ali, the secretary general of Pakistan Press Foundation, who was speaking at the inaugural day of three days safety and security training workshop at Police Training School, Islamabad. The workshop is a joint effort of Pakistan Press Foundation (PPF) and Free Press Unlimited.

Mr. Ali further added that before the year 2000, only one journalist was killed in Pakistan in 40 years but since then, more than 60 journalists have been purposely killed till today. Mr. Khawar Nawaz Raja, a TV journalist from Rawalpindi said that journalists are divided and therefore have failed to present the real issues to authorities.

More than 25 district Press Clubs officials from Khyaber Pakhtunkhwa, FATA, Punjab and Islamabad are attending the three days safety and security training workshop organized by PPF. The participant visited the PTC Islamabad on the first day where they were given training to secure themselves during the coverage of civil disturbance crime scenes which included bomb blast and unlawful mob.

The police ASI Mr. Khalid Maqsood briefed the journalists about civil disturbance. He stressed for the strong coordination between journalists and police and said that ‘everyone should know his/her limits. Police should know how it should work and so do the journalists.’ He further briefed the participants about police work procedure. He emphasized the need for journalists to maintain safe distance from incident place, specifically during bomb blasts and cross firing.

The Anti Terrorist Squad (ATS) officials were also present at the PTC who briefed the participants about commonly used weapons by Police and criminals, including G3 riffles, 9mm, and AK47. They were informed about weapon ranges and possible directions so that they should know and keep safe distance.

A mock bomb blast and unlawful mob scenes were also established inside PTC where police instructors Mr. Mohsin Raza practically briefed the journalist about dos and don’ts. They were kept on safe distance and told how to ensure their safety. The instructor requested journalists to always prioritize their safety and let first police clear the area.

Mr. Ibrar Hussain, the police law instructor briefed the journalists about the laws and powers of police which they can use to disperse unlawful mob and to arrest and investigate citizens.

The journalists, at the end of day one, appreciated the efforts of PPF and Islamabad police and hoped that such workshops will be helpful in assuring their safety. An official of Rawalpindi Islamabad Union of Journalists (RIUJ) Mr. Waqar Fani paid huge tribute to the Press Club officials of KP and FATA, one of the two most dangerous provinces for journalists in Pakistan. An official of Khyber Agency press club stressed that Tribal Union of Journalists (TUJ) should also be provided resources, so that they can assure safety of journalists in tribes.