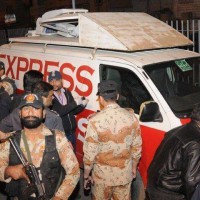 PARIS: Journalists in Pakistan are targeted from “all sides” even as the conditions for media in the country improved slightly.

“Journalists are targeted by extremist groups, militant organisations and state organisations,” stated a new report on press freedom by Reporters Without Borders (RSF).

“The Pakistani media are nonetheless regarded as among the freest in Asia when it comes to covering the squabbling among politicians,” the report added.

The advocacy group which ranks 180 countries on indicators such as media independence, self-censorship, rule of law, transparency and abuses noted that while terrorists and government may be at war with each other, both are “all always ready to denounce acts of “sacrilege” by the media.”