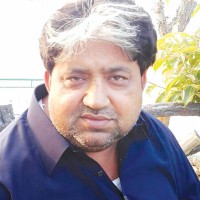 LAHORE – A staffer of daily Nawa-i-Waqt was shot and killed by unidentified gunmen at his Dera in Manawan police limits on Wednesday afternoon. The body was shifted to the morgue for autopsy.

The deceased was identified by police as 35-year-old Amir Shakeel, a designer at Nawa-i-Waqt and resident of Eden Society. Police investigators said they believe the victim was killed in a gun-attack over old enmity or personal grudge.

Amir was standing outside his Dera, located near Manawan police station, when two motorcyclists appeared there. The gunmen opened straight fire on him and fled instantly on their motorcycle. The victim was rushed to a hospital but died in the way. The police were investigating the shooting with no arrest made yet.

A 55-year-old man was found dead under mysterious circumstances in Kahna police area, rescue workers said on Wednesday.  The body, unidentified so far, was moved to the morgue for autopsy.

Investigators said the man was lying dead alongside a footpath near Soay Asal bus-stop as they reached the spot. The police were investigating the incident.