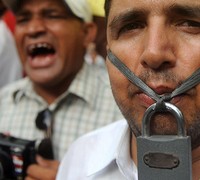 KARACHI: A month and a half back, the press club in Khuzdar opened unannounced after being shut for over a year. The press club was shut down in August last year after its president received threats from ‘unidentified men’ shortly after a press conference was held by members from the Hindu community revealing names of people involved in kidnapping for ransom.

There were calls by some journalists in Khuzdar to make the opening of the club a bigger affair by calling the director general of Frontier Corps and other higher-ups from law-enforcement agencies but the general consensus among journalists was to keep it a low-key affair. The reason behind the decision was the threat that still looms large in the district where the president and the general secretary of the press club were shot dead apart from 12 other journalists from the same district in past six years. This is not the first time the press club in Khuzdar was shut down. Facing similar threats by ‘unidentified men’ the press club was shut down for two and a half months in 2012 as well.

The bigger push to open the press club came from the administration, a handful of reporters working in Khuzdar revealed. Since the press club’s re-opening journalists work during the day and leave for home before sunset, senior journalist Shahzada Zulfiqar said while speaking to Dawn. “Most of us reporters cannot write reports the way they happen, can’t investigate openly, so what we do end up writing is very much dependent on the dictation that comes from the three sides: militants, separatists and security agencies,” he said.

Despite a crackdown on militants through the National Action Plan established in January this year, journalists count militants — whether religious, pro-state, anti-state or part of political parties — as one of the biggest threats to their lives, according to chairperson of Human Rights Commission of Pakistan Zohra Yusuf. “There has been improvement in the Federally Administered Tribal Areas (Fata) because of the ongoing operation. But the reporters are not able to independently visit and report from there. As a result of less access, we see a rise in embedded journalism than on ground reporting. Going by oneself, however, increases the chance of an attack from the militants,” she added.

56 journalists have been killed in Pakistan between 1992 and 2015, according to the data compiled by Committee to Protect Journalists. In 19 other cases, the motive is unknown. Furthermore, six other media workers have been killed.To commemorate the murder of journalists around the globe, the UN observes Nov 2 as the International Day to end impunity for crimes against journalists

The threat from militants was visible in Quetta when 23 days after the Khuzdar Press Club was shut down, ‘unidentified militants’ attacked the office of Online News agency in Quetta killing two journalists — bureau chief Irshad Mastoi and his reporter Ghulam Rasool — and an accountant Mohammad Yunus. Shortly after, two suspects belonging to the outlawed Balochistan Liberation Army (BLA) were arrested in Quetta and were handed over to police.

Both men admitted to killing Mastoi and revealed a list of people they were planning to kill which included Mama Qadeer of the Voice of Missing Baloch Persons and Hafiz Hamdullah, the leader of Jamiat Ulema-i-Islam-Fazal, among others. Shortly after revealing this information, the two suspects were, however, killed in an encounter in Mastung.

The only success story in this regard is the Wali Khan Babar case, a reporter with Geo Television, who was shot dead in Karachi in 2011. “But even in that case what needs to be looked at is that the verdict was given when the case was moved to another district in Sindh,” adds Zohra Yusuf. Another example of a verdict given in a reporter’s murder case has been in the case of Wall Street Journal reporter, Daniel Pearl, murdered in Karachi in 2001.

Analysts count the trend of ‘unidentified men’ roaming scot-free as an encouraging and recurring trend impeding prosecution. When it comes to the threat facing journalists in Pakistan, especially those reporting from the field, there is not one area which is affected more than the other as all are affected in a similar manner, says representative of Reporters Without Border, Iqbal Khattak. “The nature of the threat varies from city to city. Threat is more visible in some areas than others but it is a threat nonetheless. For instance, Karachi is a much more complicated case than Fata and Balochistan because the competing forces in the city are varied and not as visible. At the same time, dynamics change entirely when you compare upper Sindh and Karachi,” he adds.

Journalists working in central and southern Punjab, Khattak said, face harassment from the Punjabi Taliban and the administration. For instance, a few years ago, a journalist from the British Broadcasting Corporation (BBC) was stopped by the administration in Mianwali while covering a story on nuclear waste. Even after many years, a comprehensive report looking at the role of the religious groups in the southern Punjab can’t be published or telecast in any medium.

Citing a more recent example, he said, “Without mentioning names, since the issue is very latest, a journalist in Khyber Pakhtunkhwa was facing serious threats from militants. We informed his organisation and with their help were able to relocate him and his family to another city. Timely inclusion of his organisation helped a lot in ensuring his security.”

There are three layers to security, Khattak said. “One layer is ensured by you in making sure the report is accurate and objective, the second one by your organisation in terms of ensuring training and safety measures and the third one by the government in providing security and prosecution. A collaborative approach between these three is ideal but doable.”

Khattak proposes three solutions: to sensitise journalists, inform them about the region, dynamics of reporting, risks and dealing with various actors, to update organisations in dealing with risks, plan B in cases of conflict zones and ensuring balanced and objective reporting, and to make sure the government is ensuring prosecution.

According to Khattak and Yusuf, trends can be managed with the way a state manages impunity. “Despite everything, I must add that no story is more important than your life. There are threats in covering soft stories also. So, it is better to be safe,” Khattak said.

At present, the Prevention of Cyber Crimes Act, 2015, is considered one of the biggest threats to the freedom of expression. Though the act has been held back for the moment and is going through amendment.

Senior programme manager at Bytes for All Furhan Hussain said that one of the problems of the act was the way it is drafted. “Blanket powers have been given to the state and law-enforcement agencies which will curb the freedom of expression whether online or off it,” he said. Working to ensure digital security to journalists for the past five years now, Furhan recounted hearing similar stories of wire-tapping, online harassment and threats leading to attacks from journalists across the board. “We receive constant complaints from reporters receiving push messages. A push message is one which has no name or number of the sender and can contain a one-line message enough to threat a journalist,” he added.

In recent days, the digital security group speaks of witnessing an increase in the number of cases related to hate speech by what they call, “cyber armies”. The accounts by the cyber armies, according to Furhan, usually go after reporters who either report from conflict zones or give their opinion about the current situation in the country. “The accounts by these cyber armies are usually right-wing in their comments. They operate in groups and go after any reporter who speaks about the problems within his/her district, town, or city. They don’t stop until the reporter deactivates his/her account,” he added.

Women remain the most vulnerable in terms of facing harassment on social networking websites, he said. “It doesn’t matter how big a journalist a woman is, she’d face abuse and rape threats if she’s open about her findings during field visits or says anything that is considered anti-Pakistan,” Furhan said.