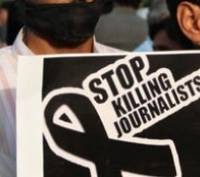 PESHAWAR: The journalist community of Peshawar on Monday held a protest demonstration outside the press club against the targeted killing of Haripur-based journalist Bakhshish Elahi, and demanded arrest of their colleague’s killers.

Holding banners and placards inscribed with slogans decrying the killing of Elahi, the media persons demanded the early arrest of his killers and asked the government to ensure protection to journalists.

Saifi said that several journalists had been killed during the last one decade, but the government failed to arrest the criminals involved in these attacks. Such ugly incidents, he said, had caused serious unrest among the media persons and they were feeling insecurity in the prevailing situation. He called for immediate arrest of the murderers.

KhUJ President Saifi said the government was least bothered about the security of media persons and that was why several newsmen had been murdered in a short span of time in the country in general and in KP and Fata in particular. He demanded judicial probe into the killing of Elahi.

He said the killing of journalists was tantamount to gagging the press freedom, asking the government to devise a tangible strategy for protection of journalists. “Had the government arrested the killers of a tribal journalist Nasrullah Afridi, Hayatullah, Saleem Shahzad and Janullah Hashimzada etc the incident of Elahi’s murder would not have happened,” Jan said and added that the frequent incidents of targeted killings were a matter of great concern for the peace loving people, particularly for journalists.

In a resolution presented by the KhUJ was unanimously adopted, asking the government to hold judicial inquiry into the brutal killing of a local journalist Bakhshish Elahi, arrest the killers at the earliest and award them exemplary punishment.

Dawn: HRCP concerned over journalist’s killing, threats to another

Dawn: Mediapersons walk out of NA against murder of journalist

The Nation: Threat To Free Speech