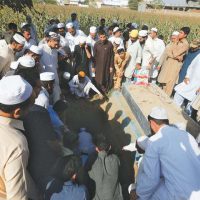 SWABI: While an FIR lodged by a brother of Haroon Khan — a journalist who was shot dead near his home on Thursday night — said his two nephews were involved in his murder, the Tehreek-i-Taliban Pakistan claimed responsibility for his killing.

In a statement, the militant group said Haroon, who worked for print as well as electronic media organisations, had been killed because of suspicions that he was spying on the Taliban for intelligence agencies.

The group gave no evidence about Haroon’s links with security and intelligence agencies.

DPO Muhammad Sohaib Ashraf told Dawn that the FIR lodged by the slain journalist’s brother, Manzoor Khan, said a dispute over a piece of land in the district headquarters, Swabi, was reason for the killing. “The motive for the killing was a family feud,” he said.

DPO Ashraf said that investigation was under way and expressed the hope that the two suspects, Jawad Khan and Hamad Khan, would be arrested soon.

Manzoor said that a few days ago a local court had handed down a verdict in favour of Haroon, but the land was still in the possession of his stepbrother, Muhammad Ali.

It has been learnt that the slain journalist had met some police officials recently to apprise them of the situation. He also sought their help because he wanted to resolve the matter peacefully, sources said.

According to the sources, the police officials had assured Haroon that if needed they would provide him with all the help he required.

Two days ago Haroon told this correspondent by phone: “I don’t want to fight with my brother over a piece of land. I only seek peaceful transfer of land as per the verdict given by the court.”

According to Manzoor, the pressure steadily built up by Haroon over the issue created fear in the minds of his two nephews who then decided to take the extreme step of removing him from the scene.

DPO Ashraf said he visited the crime scene soon after the incident and it was obvious to him as well as to his colleagues that two people had attacked Haroon. One of the assailants had sprayed him with bullets, causing his death.

“Haroon was engaged in a land dispute with his stepbrother and an official demarcation of the disputed property by the revenue staff was scheduled to take place on Friday,” he said.

He added that police had found eight empty shells of an AK-47 rifle at the crime scene that was located near the gate of Haroon’s house in the Shamshakhel area of Swabi city.

Haroon’s funeral prayers were offered at the playground of the Government High School and he was laid to rest in his ancestral graveyard.

Haroon has left a widow, two sons and a daughter to mourn his death. His elder son is only nine years old.

Members of the journalist associations gathered near the city police station and marched on the Colonel Sher Khan Chowk where they held a rally.

Speaking on the occasion, the office-bearers of the unions called upon the provincial government and the local administration to arrest the perpetrators of the heinous crime as soon as possible.

Journalists in Peshawar also held a protest and called for early arrest of all those behind Haroon’s murder.