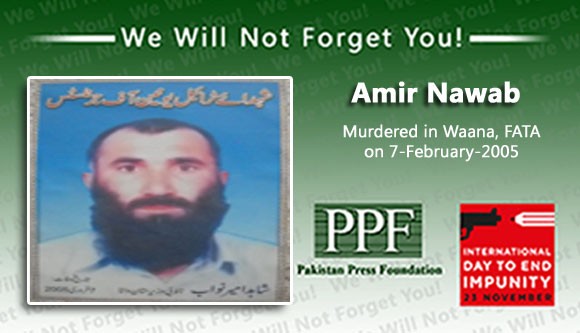 Pakistan’s tribal areas bordering Afghanistan are not the safest areas for journalists. In the province of South Waziristan, authorities routinely bar reporters from entering and journalists who report on the activities of al-Queda supporters are often harassed and threatened. On 7 February 2005, two journalists were shot and killed by armed assailants, report Pakistan Press Foundation (PPF), the Committee to Protect Journalists (CPJ) and Reporters Without Borders (Reporters sans frontières, RSF).

Amir Nawab Khan, a correspondent for “The Frontier Post”, and Allah Noor Wazir, a reporter for “The Nation” and Khyber Television, were traveling in a van near the town of Wana when men armed with AK-47 machine guns opened fire on them. The journalists were rushed to hospital but died shortly after arrival.

Two other reporters who were in the van survived the attack. Anwar Shakir, a reporter for the daily newspaper “Islam” and Agence France-Presse, was injured in the shooting and is in stable condition. Zardad Khan, who was working for Al-Jazeera, was not seriously injured. No one has claimed responsibility for the attack.

The journalists had been reporting on the signing of an agreement between Pakistani authorities and a local tribal leader suspected of having links with al-Queda and Taliban militants. Baitullah Mehsud had pledged not to support the militants or carry out attacks on government installations.

Since September 11, the Pakistani military has been under US pressure to crack down on suspected al-Qaeda militants, many of whom are believed to be hiding in South Waziristan.