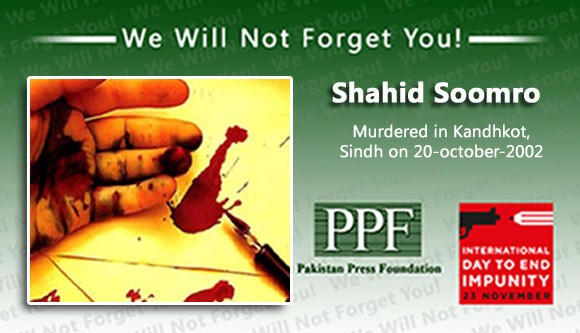 In Pakistan, Shahid Soomro, a reporter for the Hyderabad-based daily “Kawish,” was shot dead on 20 October in front of his home in the town of Kandhkot, reports the Pakistan Press Foundation (PPF). Local news reports say he was shot when five men, including two brothers of an elected member of parliament, tried to kidnap him and he resisted.

PPF says sources close to Soomro’s family believe the attempted kidnapping was in response to the journalist’s reporting during the recent election campaign. They say Soomro’s articles made him an enemy of Mir Mehboob Bijarani, a local member of the provincial assembly. He had also received anonymous death threats.

Meanwhile, on 13 October, Indian journalist Yambem Meghajit Singh was tortured and killed in the northeastern state of Manipur after reportedly criticising separatist groups and local officials on a television programme, says Reporters Without Borders (Reporters sans frontières, RSF). He was found with his arms bound and his body bore bruises.

Singh worked for North East Vision, a television company, in the town of Imphal and was the vice-president of the Manipur Electronic Media Journalists’ Union (MEMJU). He had been planning to investigate corruption in Manipur, according to MEMJU.

RSF says Singh is the fourth journalist killed in Manipur since 2000. His murder comes five days after two journalists were abducted in Imphal by members of the separatist United Kuki Liberation Front. The journalists, Iboyama Laithangbam of the “The Hindu” and Ymnam Arun of the “Eastern Panorama,” were released three days later.