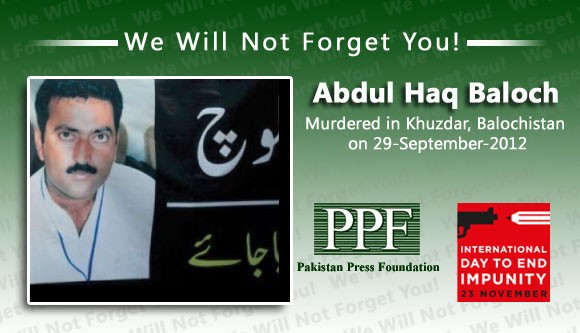 Abdul Haq Baloch, a correspondent for the ARY News television station and Secretary of the Khuzdar Press Club, was gunned down by unidentified armed men on September 29, 2012 when he was on his way home in the town of Khuzdar in the militancy-plagued province of Balochistan, Pakistan. He left behind a widow and two sons.

According to press reports, unidentified masked armed men, riding a motorbike, sprayed a volley of bullets on Baloch and fled the scene. Baloch died on the spot.

Journalists in Khuzdar said it is difficult to guess who may be behind the murder as there are a number of opposing militant groups in the area; some support separatists while others are opposed to them. Essa Tareen, president of the Balochistan Union of Journalists (BUJ), told PPF that two days ago the separatist group Balochistan Liberation Army (BLA) had warned, in a telephone message, all leading newspaper offices in Balochistan to give coverage to its activities or face dire consequences. However, the BLA today denied it was behind Baloch’s murder.

Tareen urged the separatist organizations not to kill journalists but work to resolve their grievances through dialogue. Journalists in Balochistan staged a protest demonstration in front of the Quetta Press Club. Journalists in Khuzdar locked the gate to the Khuzdar Press Club and suspended all activities to protest the murder of their colleague. Finally, the Pakistan Federal Union of Journalists (PFUJ) strongly condemned the murder and demanded the formation of a high-level investigation team and the arrest of the killers.

Two former presidents of the Khuzdar Press Club (Mohammad Khan Sasoli and Faiz Mohammad Sasoli) have been killed in recent years as was the Press Club’s senior member, Munir Shakir.