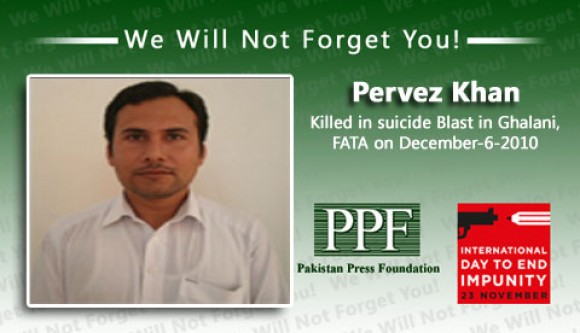 Two tribal journalists, Abdul Wahab, a reporter from “Express News” TV channel, and Pervez Khan, a reporter with the “Daily Nawa-i-Waqt” and “Waqt News” TV channel, were killed on 6 December 2010 in a suicide blast that killed 50 people and injured 120 in the Ghalanai district. Ghalanai is the administrative headquarters of the Mohmand Agency tribal district and borders on Afghanistan. Another journalist, Mohib Ali of ”NNI” news agency, was injured. The journalists were at the compound of the Ghalanai administrative office to cover a ”jirga”, a council convened by local authorities, to discuss an anti-Taliban strategy.

According to press reports, Wahab, 35, and Khan, 28, were present at the office of an assistant politician when the two suicide attackers blew themselves up in the midst of a large crowd of people that included tribal elders and community volunteers. According to reports, the two suicide bombers approached the office of Political Agent Amjad Ali Khan on motorbikes. The first suicide bomber blew himself up inside the office, while the second one set off explosives when guards caught him in the compound of the office.

Amjad Ali Khan, Political Agent and the top political official in Mohmand, said that the suicide bombers were dressed in paramilitary uniforms. One of the reasons the attacks were so deadly, he said, was because the bombers had filled their suicide jackets with bullets. He said it was prayer time and some people had gone to the mosque, otherwise the casualty figure would have been much higher.

The blast badly damaged the agency administration offices and the adjacent buildings. Soon after the blast, heavy contingents of security forces and Khasadar Force personnel rushed to the site and cordoned off the area. The injured people were rushed to Agency Headquarter Hospital and Lady Reading Hospital in Peshawar.

Tehreek-e-Taliban Pakistan (TTP) claimed the responsibility for the attack and termed it a reaction to the military operation in the Teshil Safi area of Mohmand Agency. Taliban leader Umer Khalid also threatened more attacks on anyone joining military operations against them.

Khan leaves behind two sons, two daughters and a wife. Wahab was a former general-secretary of Ghalanai Press Club. He is survived by a widow and two daughters. Injured journalist Ali was admitted to Peshawar hospital with injuries to his hand, abdomen and back.

The editor of “Daily Nawa-i-Waqt” and editor-in-chief of the daily “The Nation”, Majid Nizami, and the staff members of the media group have expressed their sorrow and grief over Khan’s death.

On 6 December, the Pakistan Federal Union of Journalists (PFUJ) reiterated its demand that parliamentarians immediately devise a Media Practitioners’ Protection and Media Managers Responsibilities’ Act to protect the lives of journalists and media workers.

The PFUJ announced it would observe a three-day mourning period, hoist black flags and hold condolence meetings at press clubs, offices of affiliated unions of journalists and at news centres throughout the country.

The PFUJ also demanded that the victims’ families be compensated forthwith.

The Tribal Union of Journalists (TUJ), National Press Club Islamabad and the press clubs of Lahore, Peshawar, Karachi and Quetta also paid tribute to the journalists. The TUJ president Ibrahim Shinwari said that journalists, especially in the tribal areas, had been working in harsh conditions as almost all the tribal areas have turned into conflict zones.