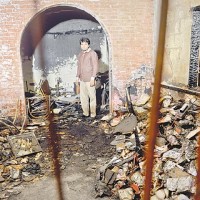 KARACHI: The owner of a web TV channel, whose office was damaged in a fire that broke out under ‘mysterious’ circumstances on Monday, believed it was an ‘arson attack’ and said on Thursday that he had been receiving threats for “the past six months”.

Situated in a congested lane of a predominantly Christian neighbourhood in Akhter Colony’s C-Sector, the web TV office is set up on the first floor of a four-storey building with a Catholic church, St Peter’s Church, standing right across it.

Sarfaraz William, the web TV owner, was the first one to be informed by the Mehmoodabad police personnel when the fire broke out in its office between 2:30am and 3am on Monday.

Standing near a pile of burnt copies of the holy books in the three-room apartment, Mr William spoke about the threats he had been receiving since May.

Illuminated by one of the remaining studio lights, the owner explained the routine office work saying: “What we do over here is very simple. We hold Christian congregations and speak about God, followed by a sermon and the usual geet (songs). The sermon of the day is then uploaded on our website that reaches hundreds of other people. It was in May when we started receiving threats from some religious organisations to close down our office or to face consequences.”

The threat was followed by a complaint by the same organisation at the Mehmoodabad police station against “increasing tableegh by members of different religious groups”. The police officers, according to Mr William, did not take any action but it “forced us to be cautious”.

Working from the same neighbourhood for the past seven years, the office of Gawahi.tv is funded by the Gawahi Welfare Organisation, also owned by Mr William. Giving a tour of the three-room office, which was dark and filled with the smell of burnt plastic, Mr William pointed towards the missing database of the destroyed computers in the editing room.

Pointing to the walls which remained unharmed in the fire, he said that only some of the things caught fire “which makes me believe that it was a case of arson and not short-circuit as was previously mentioned in the fire department’s initial inquiry report.”

The fire brigade, which came to the rescue on a call of the Mehmoodabad police station at around 4am on Monday, in its initial inquiry reportedly stated that the fire was caused by ‘a short-circuit’.

But when Chief Fire Officer Tehseen Ahmad Siddiqi was asked about it, he denied it. He said: “The inquiry report lying in front of me states that the cause of fire could not be ascertained.”

According to a recent department policy, he explained, “the fire department is not allowed to state the cause of a fire until they are 100 per cent sure of it.

“And in this case, when the fire fighters reached the building most of the things inside the office had already been destroyed. So there was not much left to ascertain the cause of the fire.”

On their part, Mr William and his team made sure to lodge an FIR on Thursday and were waiting for the police officers to complete the investigation. “The police have been very accommodative and cooperative for the past four days. For now, we are waiting to see what becomes of the investigation,” said Mr William.