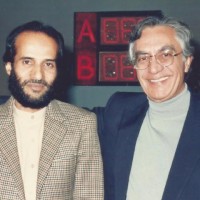 ISLAMABAD: Aslam Azhar, a distinguished broadcaster and media personality, died in Islamabad on Tuesday. He was 83 years old.

His days in the world of the small screen are dubbed the golden years of television in Pakistan. Aslam Azhar was one of the founding fathers of Pakistani TV, the title not merely an empty slogan. When the medium came to Pakistan in 1964, he spearheaded its evolution. He did not make his exit before converting PTV into a dynamic broadcasting institution.

Born a son of a government servant in Lahore in 1932, he followed a meandering career path. He went to Cambridge to study for his bachelor’s in law with honours in the mid-1950s and returned to join a multinational oil company. But his time in the corporate world was brief. The culture wasn’t suited to his temperament; his passion was destined for the charting of another world.

In the 1960s he moved to Karachi and started dabbling in documentary film-making, advertising, radio broadcasting and, above all, his deep passion for the theatre. He was instrumental in setting up the Karachi Arts Theatre Society that used to stage plays at the Theosophical Hall. It was in that theatre group that he met Nasreen and they decided to settle down as life partners.

In 1964 the government decided to bring television to Pakistan by setting up a pilot station in Lahore. Azhar proved to be the first choice to carry out the project, which he did in a record time of three months. After starting the Lahore station successfully the government commissioned the Dhaka, Rawalpindi and Karachi stations. Before long, Azhar rose to the post of managing director of PTV.

With his history as an outstanding dramatist from his days as a student of physics at the Government College, Lahore, his strong linkages with theatre and broadcasting proved a real asset for him as he laid the foundation of television as a medium of great importance in Pakistan’s social and cultural life. He also galvanised and raised a strong team of talented writers, performers and television professionals.

But if one had to summarise Azhar’s contribution to the arena of culture and broadcasting in Pakistan, it would be the vision and intellectual understanding that he imparted to the medium to give it a sense of direction.

These were based on his progressive ideals enveloped in the ethos of Pakistani society. Political upheavals forced him to make his exit from television. Remaining firm to his ideological commitments and integrity, he paid the price by spending a good number of years in the wilderness, but never surrendering or compromising, during the long rule of Gen Ziaul Haq.

But even in the days of adversity his enthusiasm and quest for creativity were not dampened. Coming out from the world of television he plunged himself into the world of education and theatre, which he very often described as his two great passions.

In the mid-1970s he established the theatre group Dastak in Karachi and remained committed to the cause of producing quality stage plays based on classical literature that portrayed the harsh realities of life. For a brief period he also managed the affairs of a chain of private educational institutions.

Throughout his career as a broadcasting specialist and a champion of free speech, Azhar was one of those enlightened citizens who kept an eye on the needs of society and opposed unethical conduct, particularly in the media.

He was often found arguing at public forums that modern-day battles are no longer fought simply over territory, but are battles for minds waged by the media on behalf of global corporations.

With his many talents, Aslam Azhar was a man for all seasons, one who had the critical ability to distinguish between good and bad, between need and greed, and between the necessary and the redundant. The indelible mark he left as a founding member of television is a source of guidance for all those who are engaged in TV broadcasting even today.

He is survived by his wife, Nasreen Azhar, two sons and a daughter. Nasreen Azhar is a well-known human rights activist.