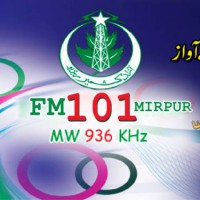 MIRPUR (AJK) – Due to non-payment of funds by the Pakistan Broadcasting Corporation, the news section of Azad Kashmir Radio Mirpur and FM-101 have reached at the verge of complete closure.

Now, there is an apprehension that its daily news transmissions may go off air at anytime, officials concerned said.

The PBC authorities at Islamabad have completely withdrawn, by now, the monthly funds of Rs80,000, allocated for the disbursement of remuneration of the staff including news translators and news readers, of the news section of AJK Radio Mirpur plus Radio FM-101. The slash in the allocated funds of the news section of the AK Radio Mirpur was practiced gradually for the last six months. The funds were curtailed from Rs80,000 to Rs20,000 and later withdrawn completely.

The complete stoppage of the monthly funds caused non-payment of the remuneration to the staffers. The ugly state of affairs has led the apprehensions of complete closure of the news section.

Azad Kashmir Radio and FM-101 are presently airing three news bulletins on daily basis one each in national language of Urdu besides in regional Gojri and Pahari languages, since its inception on September 30, 2002. Despite the exceptional significance of the unit in this part of Azad Jammu & Kashmir, the station was always found facing step-motherly attitude of the PBC authorities.

Even the due sanctioned strength of its manpower is not met so far despite the long 14 years of its establishment. The radio station is sanctioned with the due manpower strength of 60 positions of different nature including news editor, sub editors, reporters, computer operators, resource persons for news section as well as programme producers, broadcasting engineers, mechanics and other subordinate administrative staff members.

However, the radio is being run by only 30 persons at present.

When contacted, the station director said that the Radio and FM-101 were strongly encountering at least 19 rival transmitters of All India Radio at its medium wave, short wave and FM frequencies operating in the Indian-occupied Jammu & Kashmir, frustrating the nefarious propaganda of the enemy (India) about Kashmiris indigenous struggle for freedom with full vigour.

Station Director M Shakeel confirmed the total withdrawal of the due allocated funds meant for the news section of the Radio Station by the higher authorities. He, however, said that authorities concerned have been apprised of the grim situation on emergency grounds with strong recommendations of early resumption of the allocated funds for keeping the news section functional.

Local elite representing diverse segments of the society have expressed grave concern over the alarming situation at Azad Kashmir Radio Mirpur where news section has reached at the verge of complete collapse.